Difference between Graffiti and Street Art 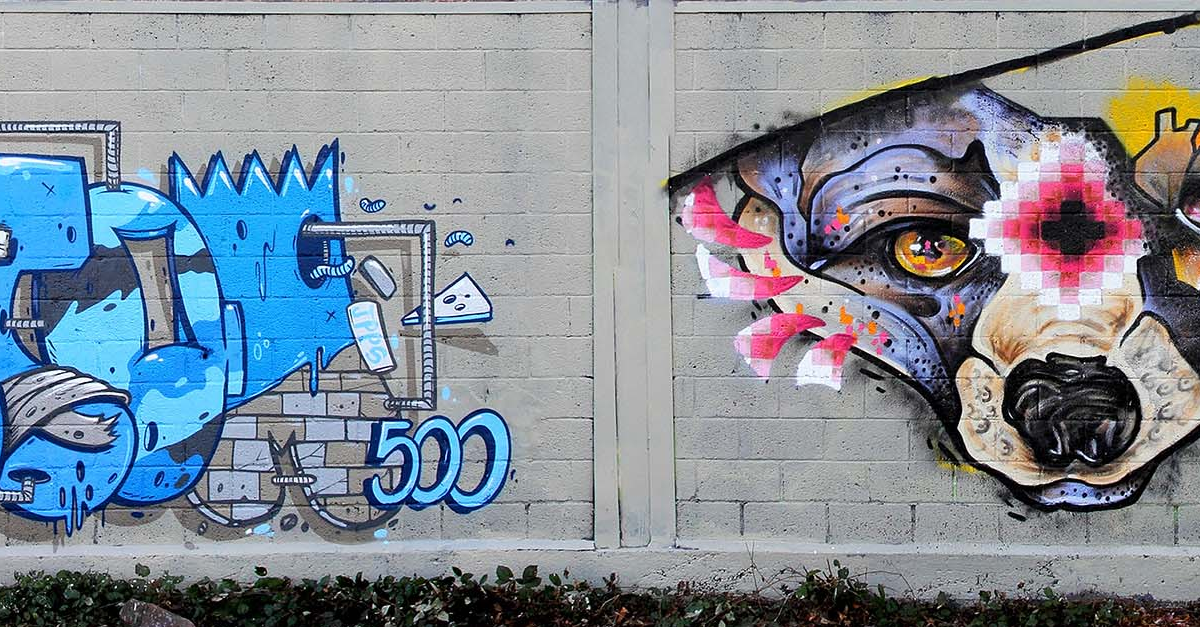 It’s been a while since people used art to show their creativity and express their inner selves. Out of hundreds of art forms, the most popular among youngsters are Street art and Graffiti, which helped them in self-expression. Indeed, you’ve seen many buildings, walls, cars, bridges, trains, etc., concealed with painted murals and styled writings and praised it or thought it vandalism.

Graffiti and Street art are two art forms that always confuse nonartists as they are often used interchangeably to describe any art drawn or painted in public areas. However, they are dissimilar in their ways and targets a different audience. We’re confident that after reading this article, all of your confusion regarding these terms will blow away as we will unveil what Graffiti and street art and the difference between Graffiti and Street art in detail is.

In the real world, these two terms have been intertwined for so long, and quite challenging to place them in two boxes and untangle them, but it has to be done in some way so let’s begin with defining each term individually, then we’ll heading towards the Graffiti vs. Street Art.

What is Graffiti Art?

Graffiti is a contemporary art form that includes drawing or writing scratched, sprayed, or scribbled illegally on city walls and other public areas. It often includes spray painting. It was first introduced during the mid-20th century in urban America; New York and Philadelphia were the centers where this art form got recognition.

Graffiti is considered vandalism as it implicates an illegal marking of public areas. Typically it shows rebellion and pictorial language overlooked. Therefore most people assumed it was an act of thrill-seeking to gain attention and link Graffiti with hip-hop culture. Graffiti also act as a vessel for social and political activism.

The most common assumption about Graffiti is that its spray painting on the city walls illegally by rebel street gang members to mark their territory. And somewhat it’s true, but that’s not what defines Graffiti. In the modern world, people considered it a respectful art form and taught by many art institutions thou it is universally not accepted.

What is Street Art?

Street art is visual art found in public areas, i.e., highway overpasses, building walls, sidewalls, etc. it is usually spotted in urban areas. Though street art got its roots in Graffiti, the core difference between street art and Graffiti is perception. Artists generally create this art to communicate important messages to the public. Those messages can be social interpretations or political views to create public awareness. Most street art has switched to mainstream art and gotten international recognition. Contrary to Graffiti artists, street artists grant permission from the building owners or authorities.

What’s the difference between Graffiti and Street Art?

Graffiti and Street art overlap in several ways, but here we are highlighting a few differences that untangle both terms:

Graffiti tends to be word-based, whereas street art is more likely to be image-based. The most common example of Graffiti is Tagging. In Graffiti, artist use single symbols, words, or letters to express their art skills, whereas street art elaborates images-specifically murals. Businesses and other organizations always admire murals; therefore, street art has a broader scope. It’s easy to understand and interpret, unlike Graffiti which is hard to read or sometimes impossible to understand by beginners.

In addition to this, Graffiti experts are self-taught. However, street art is usually made by professional artists.

The street artist works as a commercial artist. They proudly mentioned their names and signed their murals and other masterpieces. However, Graffiti artists try to remain anonymous. They even categorize themselves as writers, not an artist. Tags are their signature. They don’t reveal their real names or even dislike getting their work promoted commercially.

Graffiti is considered illegal or even banned in most states. The rule of thumb for graffiti artists is to avoid getting caught while writing on city walls. Therefore, these artists don’t seek permission. On the other hand, street art is legal as firms hire them to paint desired spaces. This art form is allowed and grant permission to do their job. Suppose a firm owner wants to paint their office walls or wants murals so that they will search and hire the most qualified artists. The street artist always takes permission to paint.

While creating artwork, street artists use paints, tools, or supplies they find suitable. Conversely, spray paints are the only tool that Graffiti artists have used for ages. However, we can now find many evolved and diversified graffiti-related painting materials.

Multimedia and paste-ups are getting more popular day by day. Clay, vinyl markers, stencils, eggshell stickers, textiles, and wool can be found in street graffiti.

In the eye of people, graffiti associates with vandalism, gangs, and violence, and they have a negative perception of this art. On the other hand, street art has a positive image among people.

The main difference between Graffiti and Street art is their perception, which shows how people perceive it either positively or negatively. Despite the differences. There are some similarities between street art and Graffiti. You can see both art forms together or even layered one over the other. These two artistic movements are significant to modern culture and art.